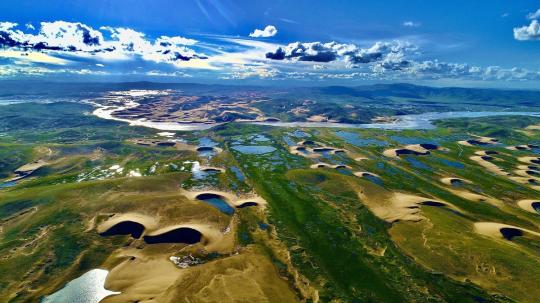 At the Leaders’ Summit of the 15th meeting of the Conference of the Parties to the Convention on Biological Diversity on Tuesday, President Xi Jinping said by video link that China is moving faster to establish a protected areas system with national parks as the mainstay.

Xi said areas with the greatest importance to the natural ecosystem, and with the most unique natural landscapes, the most valuable natural heritage and the greatest biodiversity reserves will be included in the system.

In 2013, the central government put forward the creation of a national park system with the aim of establishing a series of facilities and building a unified management system by 2020.

In 2019, the State Council, China’s Cabinet, unveiled a guideline on nature reserves, with national parks as a major component. The reserves are intended to provide systemic protection of natural ecosystems, cultural relics within each region, scenery and biodiversity, and also safeguard the country’s environmental security.

“The primary purpose of establishing nature reserves is to protect fragile ecosystems, which have been under constant attack from human activities,” said Tang Xiaoping, deputy director of the National Parks Management Office at the National Forestry and Grassland Administration.

In 2016, the Three-River-Source National Park became the first of the country’s 10 pilot national parks after the central government decided to protect its ecosystem.

The park, which is home to the sources of three major rivers－the Yangtze, the Yellow and the Lancang (known as the Mekong once it leaves China)－covers 190,700 sq km, about 14 times the area of Yellowstone National Park in the United States and 19 times larger than Banff National Park in Canada.

It is home to hundreds of species of wild animals, many of which are under State protection, such as wild yaks, snow leopards, Tibetan antelopes and Tibetan gazelles.

In 2018, the Giant Panda National Park was established. It connects fragmented habitats in Sichuan, Shaanxi and Gansu and protects more than 70 percent of the country’s wild panda population.

In the Northeast China Tiger and Leopard National Park, which covers 14,100 sq km in Jilin and Heilongjiang, a high-tech surveillance system was launched to provide real-time protection for flora and fauna.

Thanks to the establishment of the national park and those strong protection efforts, at least 12 Siberian tiger cubs and 11 Amur leopard cubs have been born since 2017, according to the park’s management office.

“The establishment of national parks is to better protect China’s most valuable bioresources and maintain the natural systems’ originality. These are our precious natural assets that should be well conserved for the next generations,” the National Forestry and Grassland Administration said in a statement released on Tuesday.