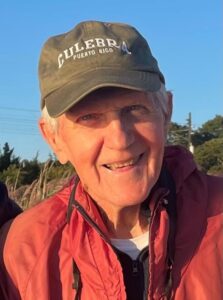 OLD LYME — Henry Thomas Golet, of Old Lyme, Connecticut, passed away on October 15, 2021 at the age of 84. Henry, or “Hank” as he was known to many, died peacefully at home with the sounds of birds and his water garden outside his open door.

Born in Middletown, Connecticut, Hank was the son of the late Walter “Jack” and Louise (Ryczek) Golet, and grew up in Moodus. His father worked at a local hunt club, and together with Louise raised four children, passing on strong family values and a love of the outdoors. Hank continued family traditions of amateur archeology, commercial shad fishing, and sharing the joys of the natural world with others.

Hank graduated from Nathan Hale Ray High School in 1955, where he was a star athlete and member of the Hale Ray Hall of Fame. After high school, he proudly served in the US Marine Corps, and then spent most of his working life as a lineman for Connecticut Light and Power Company. He took satisfaction in restoring power when the lines went down, as was common during New England storms.

Retiring at a young age, Hank had the ‘golden’ opportunity to pursue may of his lifetime hobbies full-time—and take on new ones. These included a mix of sports and outdoor pursuits, increasingly developing and sharing his knowledge as a naturalist and his love of nature. After years playing tennis, Hank took on road racing. His favorite event (at least in retrospect) was the Mount Washington road race. He was an age group champion several years running and held the course record for years after. He also earned a Hartford Track Club runner of the year award in 1989. More than his competitive accolades, however, Hank valued the friendships and comradery he found in the running community.

An avid explorer, whether by kayak or on foot, Hank knew the lower Connecticut River valley inside and out. He was a tireless volunteer and trail steward for the Old Lyme Conservation Trust and was well-versed in the flora and fauna of the region. He took a special interest in amphibians, butterflies, and most of all birds, building and erecting hundreds of bluebird boxes and osprey nesting platforms. He was an expert fisherman, beekeeper, garlic farmer, and blueberry grower and provided his family and friends with a steady supply of the delicious outputs.

Hank enjoyed sharing wonders of the natural world with others, whether it was the springtime display of the woodcock or the fall murmuration of swallows at Goose Island, the latter of which he was proud to introduce to his neighbor and friend Roger Tory Peterson in 1995. He used his camera to chronicle the life around him and shared his observations in slide shows focused on local wildlife and scenes from his travels.

“Hank the Birdman” as he was known to the school children of Culebra, led field trips and conducted surveys as a wildlife refuge volunteer. In sharing the wonders of the natural world, he did much to advance a conservation ethic in others, and this may be for what he is most remembered. Then again maybe it will be for the tasty honey that he made available in local markets from his beehives!

Hank is survived by his daughter Nicole Berry of Lyme, his son Gregory and wife Debbie of Chico, California, his brother Francis and wife Susan of West Kingstown, RI, his five grandsons, Bradley and Nicholas Berry, and Dylan, Ben, and Kyle Golet, and numerous cousins, nieces, and nephews. He is also survived by his former spouse, Geraldine Golet, of West Dover, Vermont, and his first wife Shelley Sternicki of Eustis, Maine.

A celebration of life is being planned for the spring, with details forthcoming. Memorial contributions may be made to the Roger Tory Peterson Institute or the Old Lyme Land Trust.

Pathogenesis of Long COVID. Considerations for etiology and… | by John Wallbank | Nov, 2021

Wander List: From biosphere reserves in Madeira to ye olde groceries in Kildare