The Valley of the Geysers on Russia’s Kamchatka Peninsula is the second largest geyser field on earth, after Yellowstone. Six kilometres long and four kilometres wide, it is one of Russia’s seven natural wonders. Unlike Yellowstone, it does not also feature a parking lot for 1,000 cars. There are no cars at all because there are no roads. The only way in is by helicopter.

A beautiful but secret place

Geologist Tatyana Ustinova discovered the Valley of the Geysers in 1941. She named the first geyser she saw Pervenets or ‘first-born’. She was unable to explore longer because of a lack of funding and the country’s involvement in World War II. In the 1970s and 1980s, toward the end of the Cold War, the Soviet government scouted it for potential tourist opportunities. But Kamchatka was also a closed military area. It hosted the Soviet Pacific fleet and an airbase for long-range nuclear bombers. The first westerner wasn’t allowed to visit until 1990. 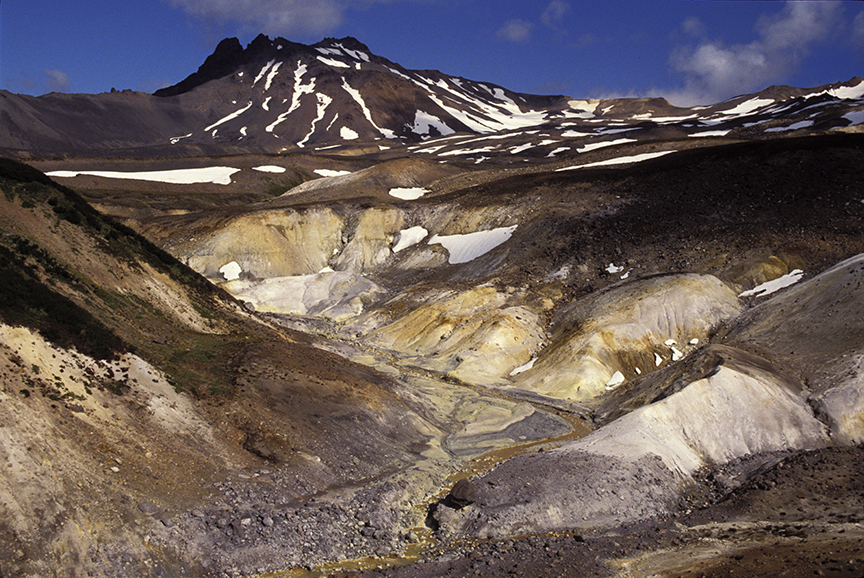 While the Valley of the Geysers is unique, active volcanoes riddle the 1,250km long Kamchatka Peninsula. These volcanoes are quite different from those in Hawaii. The basalt in Hawaii is less viscous, so it flows more easily. Kamchatka volcanoes tend to plug up, so their eruptions are explosive.

“In Kamchatka, when a volcano erupts, you run for your life,” explained one vulcanologist. “Events on the scale of a Mount St. Helens occur here about once every 25 years.”

The Valley of the Geysers lies in Kronotsky Nature Park, 11,421sq km of volcanoes, the Vostochny mountains, geysers, and the world’s largest brown bear population. The site is so ecologically sensitive that mainly scientists are allowed to visit.

In this valley, molten rock lying near the surface has heated the water table and created twenty-five large geysers and another 175 small ones. Periodically, like tea kettles lifting their caps, they let off steam. Unusual mosses grow near the wet vents in many colors. One particularly colorful area is called the Stained Glass. There is the occasional whiff of sulfur. The little Geiyzsernaya River, lukewarm in spots, splashes through the scene.

The Valley of Death

A stratovolcano called Kikhpinych, which generates a sizzling 250℃ half a kilometre underground, feeds the geysers. The base of the Kikhpinych hosts another valley called the Valley of Death. Here, pockets of deadly carbon dioxide smother animals close to the ground.

“You can dip a lighted rag on the end of a stick into one of those pockets and watch the flame die out,” one scientist explained. “Then when you lift the rag out, it lights again.” You can walk safely through the Valley of Death, but don’t take a nap there.

Scientists hypothesize that the Valley of Geysers formed when a volcanic cone collapsed over 40,000 years ago. Pressure and steam needed release. Eventually, fissures in the rocks provided an outlet. 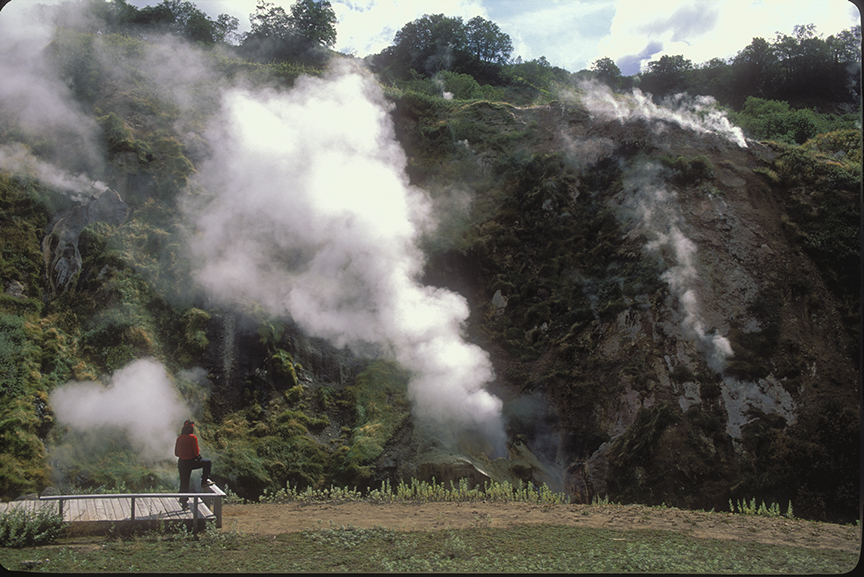 There are two main geothermal fields, containing both small and large geysers. Velikan, the largest geyser, sprays up to 30m.

The Valley contains many types of rocks and a variety of plants and animals that thrive in this valley, so much milder than elsewhere in subarctic Kamchatka. Many flowers, particularly orchids, bloom. Brown bears wade through the warm waters of the Geiyzsernaya River to catch salmon. 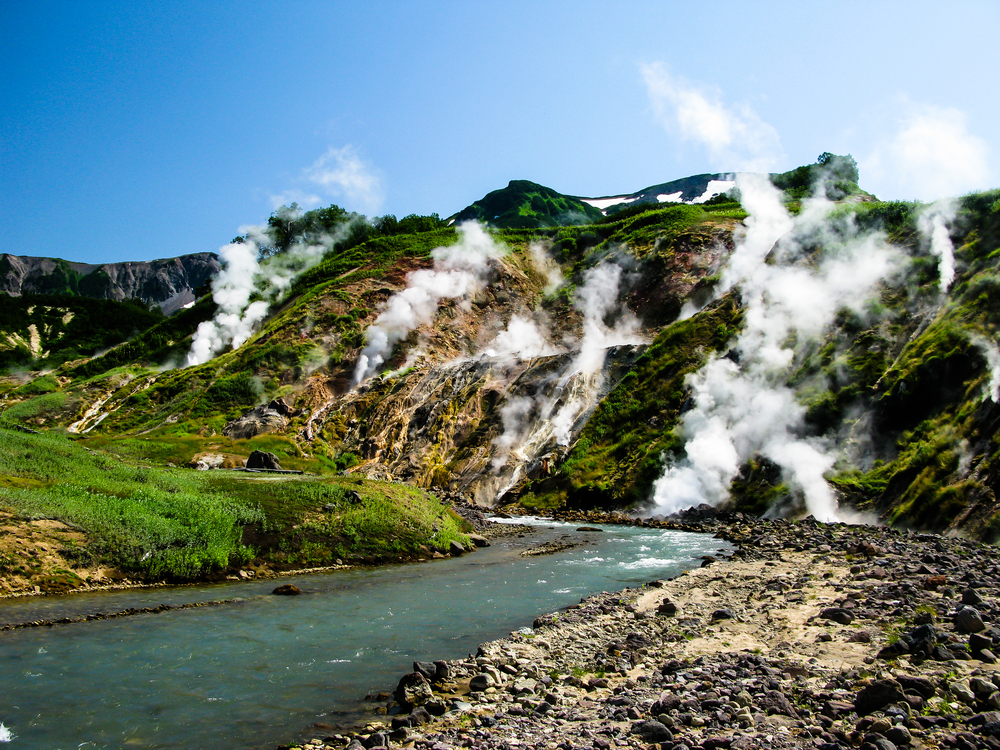 The Geiyzsernaya River, in the Valley of the Geysers. Photo: Homo Cosmicos/Shutterstock

Despite the destruction, the area remains one of 102 of Russia’s zapovedniki (protected nature reserves) and the subject of scientific intrigue.

Kristine De Abreu is a writer (and occasional photographer) based in sunny Trinidad and Tobago.

Since graduating from the University of Leicester with a BA in English and History, she has pursued a full-time writing career, exploring multiple niches before settling on travel and exploration. While studying for an additional diploma in travel journalism with the British College of Journalism, she began writing for ExWeb.

Currently, she works at a travel magazine in Trinidad as an editorial assistant and is also ExWeb’s Weird Wonder Woman, reporting on the world’s natural oddities as well as general stories from the world of exploration.

Although she isn’t a climber (yet!), she hikes in the bush, has been known to make friends with iguanas and quote the Lord of the Rings trilogy from start to finish.

Should you really be chugging fulvic acid or smearing it on your face?

Cultures of Africa DLC impressions — Is it worth it?

From the Editors: The outdoors beckon in the UAE – Gulf News